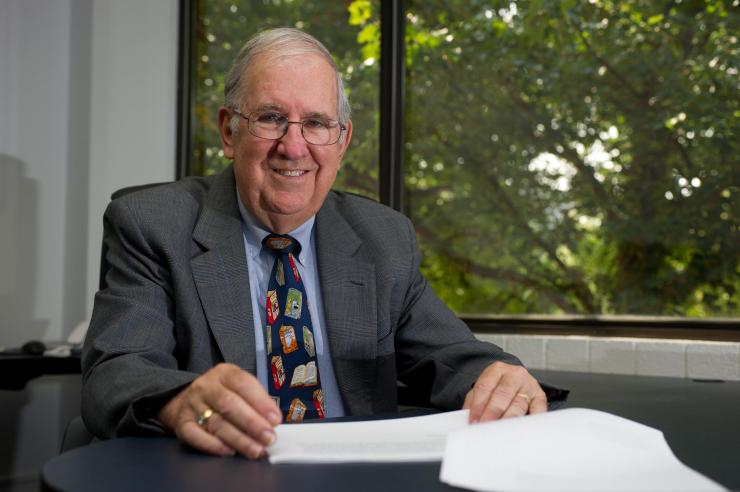 Mike Thomas, who died on November 23, 2018, is remembered for the important leadership roles he played at the Georgia Institute of Technology in his quarter-century connection with the university. He served in various leadership roles, including provost and vice president of academic affairs, chair of the H. Milton Steward School of Industrial Systems Engineering (ISyE) and, briefly, acting president of the university.

But even though his background was grounded in operations research, administration, and industrial engineering, Thomas became something of a pioneer in the development of biomedical engineering education in the U.S., playing a leading role in the creation of the Wallace H. Coulter Department of Biomedical Engineering at Georgia Tech and Emory University.

“When this department was first being discussed, they needed a provost with vision to see how good this could be for Georgia Tech,” said Ajit Yoganathan, a founding member of the Coulter Department, now Regents’ professor, distinguished faculty chair, and associate chair for research in the department, one of the highest ranked BME schools or departments in the nation.

“Mike Thomas had that vision,” added Yoganathan, also a founding member of the Petit Institute for Bioengineering and Bioscience at Tech, who knew and/or worked with Mike and his wife Pat Thomas for almost 40 years. “ I don’t think this department could have developed as it did without his leadership at Tech. And Pat also played a critical role in the department’s development.”

When Mike Johns left his post as dean of Johns Hopkins’ School of Medicine to become executive vice president of health affairs at Emory in 1996, he called his friend Don Giddens (former Georgia Tech bioengineering researcher and at the time dean of engineering at Hopkins) to ask what he thought about the potential for a biomedical engineering department in Atlanta.

Johns envisioned a partnership between Emory’s clinicians and engineers at Georgia Tech, and Thomas’ name kept coming up.

“There was no biomedical engineering program here, so I asked Don his thoughts and he said, ‘you’ll want to talk to the provost. His name is Mike Thomas,’” Johns recalled. “Then, not long after that, I was at an NIH council meeting with Bob Nerem, [executive director of the Petit Institute at the time at Georgia Tech]. I’ll never forget, we flew back to Atlanta together from D.C., and on the escalator to the baggage claim I suggested we try to get a biomedical engineering program going between our two universities. When he saw that I was serious, he said, ‘we need to talk to Mike Thomas.’”

Not long after that, Nerem and Thomas visited Johns and dean of Emory’s School of Medicine, Tom Lawley, and everyone agreed to move forward with a plan to develop a unique new academic program that would award graduates a degree from both public Georgia Tech and private Emory.

“We all agreed that we had to recruit someone to lead the effort,” Johns said. “Mike pauses a second than says, ‘um, we already have someone in mind.’ I was immediately concerned and thought, oh boy, who are they going to try cramming down my throat. Then they said, ‘Don Giddens.’”

Everybody was on the same page. After five years as dean at Hopkins, Giddens was ready to come back to Atlanta and liked the opportunity waiting for him as founding chair of a new academic department of biomedical engineering.

“The opportunity to work with Mike Thomas and Mike Johns and build this thing from scratch was very appealing,” said Giddens. “After we agreed on everything – number of faculty, our location and so forth, I had two additional requirements of Mike Thomas: I asked to regain my Georgia Tech season basketball tickets, but more important, I asked that his wife, Pat Thomas, become my administrative assistant when the department was formed.”

That’s exactly what happened. Giddens got his basketball tickets, and the first three full-time employees in the new department were Giddens, Yoganathan, and Pat Thomas.

Several years later, Giddens had to leave the Coulter Department -- he'd been hired as dean of Tech’s College of Engineering. During a time of consistent growth, the department needed someone to serve as chair in the interim and Giddens knew who to ask.

“Mike couldn’t say no – he loved the department of biomedical engineering,” Giddens said. “He knew the people at Georgia Tech and Emory, and had a steady, calming style. He was the perfect guy to lead it.”