Suddath Symposium gets into the Brain 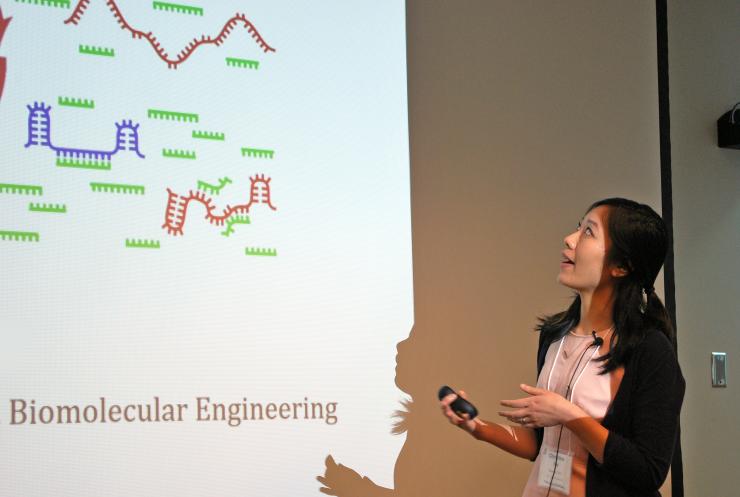 The 25th annual Suddath Symposium was devoted, for the first time, to neuroscience research. The two-day event (Feb. 21-22) featured speakers from across the country and both sides of the Atlantic – some of the world’s thought-leaders in the budding field.

But it was a young, recently-minted Ph.D. in the area of chemical and biomolecular engineering who took center stage as the event unfolded. Suddath Award winner Christine He, from the lab of Petit Institute researcher Martha Grover, and with one foot out the door, delivered the first presentation of the symposium, and it had nothing to do with neuroscience.

Such is the nature of this well-attended, wide-ranging event. At the end of every calendar year, a doctoral student is selected as the Suddath Award winner, for having demonstrated a significant research achievement in biology, biochemistry, or biomedical engineering. In addition to the $1,000 first prize, the winner also is invited to present his or her research at the annual Suddath Symposium, regardless of whether or not it matches with the symposium’s selected theme.

He, the seventh woman in a row to earn the honor, presented her research project (entitled, “Building a Model Prebiotic Nucleic Acid Replication Cycle in Viscous Enivornments.”). And even though it was not about neuroscience, her presentation – delivered with the calmness of a seasoned pro – drew a packed room.

“I wasn’t really sure what to expect, so I was very pleased with the turnout,” said He, who opened the two-day symposium on Tuesday, then caught a plane Wednesday morning for her new assignment as a post-doc at the University of California-Berkeley, where she’ll be working in the lab of Jennifer Doudna, the scientist who co-invented pioneering new technology for editing genes, called CRISPR-Cas9.

“This is going to be exciting,” He said Tuesday evening, shortly before leaving for the next phase of her life.

Meanwhile, the neuroscientists and neuro-engineers kept packing the Suddath Room on the ground floor of the Petit Institute.

“This is an exciting time in neuroscience. Things are rapidly expanding in the field, especially here at Georgia Tech,” said Garrett Stanley, co-director of this year’s symposium with Hang Lu. Both are Petit Institute researchers.

“The goal is to highlight some of the excitement of neuroscience and neuro-technology from our community, but also to talk to non-neuroscientists and get them excited,” said Stanley. “So we brought in people from across the U.S. and abroad, an exciting array of speakers. I think the interest and attendance at this symposium is a reflection of the growing interest in the field. And really, we’re just getting started.” 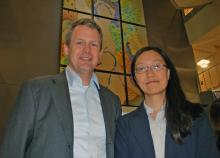 Christine He delivers the opening presentation of the 2017 Suddath Symposium at the Petit Institute for Bioengineering and Bioscience.

Garrett Stanley and Hang Lu were co-directors of the Suddath Symposium.

Vincent Pieribone of Yale University, one of the neuroscience thought-leaders on hand for the Suddath Symposium, presents his research.