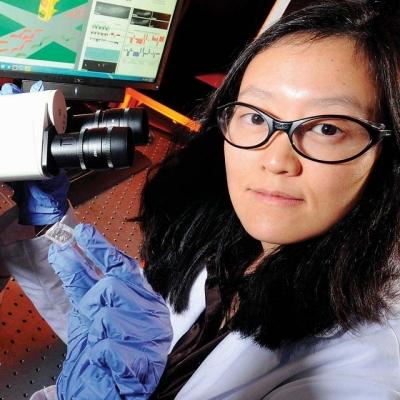 For all animals, perception and behavior are usually multisensory processes, often involving stimuli such as taste, smell, and touch, which are detected by distinct sensory neurons.

Understanding sensory integration is an important problem in neuroscience, because all animals need to figure out what stimulatory input is relevant and how to respond to changes in the environment for survival.

The study of information processing mechanisms in multi-modal sensory integration remains challenging. But researchers in Georgia Tech’s School of Chemical and Biomolecular Engineering (ChBE) have developed a microfluidic device that can provide well-controlled stimulation in multiple modalities while allowing optical recording of neuronal responses in the roundworm Caenorhabditis elegans (C. elegans).

The use of C. elegans in neuroscience research is common due to its small and well-defined nervous system, containing 302 neurons. Although a simple organism, many of the molecular signals controlling its development are also found in more complex organisms, such as humans. C. elegans is known to respond to variety of sensory cues, such as smell, taste, touch, oxygen level, and temperature.

ChBE PhD candidate Sol Ah Lee, a member of Professor Hang Lu's Fluidics Lab, explains that before she developed the new microfluidics device, researchers could deliver mechanical or chemical stimulation to C. elegans, but not multi-sensory cues with the same piece of technology.

“No one had attempted this kind of device that can deliver multiple types of stimulation to C. elegans,” says Lee, who is co-lead author of the study, “Multimodal Stimulation in a Microfluidic Device Facilitates Studies of Interneurons in Sensory Integration in C. elegans.”  The other co-lead author is Yongmin Cho, ChBE PhD 2017, who is a Lu lab alum and now a postdoctoral fellow at Harvard Medical School.

The study, which will be the cover article of the March issue of the journal Small, describes the researchers’ engineering approach and several important results enabled by this new device.

A major goal of the study was to observe interneurons that integrate the sensory and internal signals. The nervous system also includes sensory neurons that interface directly with the environment and motor neurons that convey commands to muscles.

Although the anatomical connectivity of these sensory systems and the role of each sensory neuron have been independently characterized, the integration of these signals and whether and how the neurons modulate each other’s activities has been largely unknown, the study says.

“With this study, we showed how the worms actually integrate multiple environmental cues, and we use it to explore genetic and circuit mechanisms for multisensory integration,” Lee says.

Depending upon the timing and intensity of the stimuli delivered, researchers could see sensitization, a non-associative learning process in which repeated administration of a stimulus results in an enhanced response, as well as habituation, another form of non-associative learning in which an animal decreases or ceases responding to a stimulus after repeated or prolonged stimulation.

The study also found that the activities of the interneuron PVC (whose function had not been studied much) can be modulated prior to stimulation within and cross modalities. Furthermore, this phenotype is likely mediated by peptidergic signaling and possibly monoamines. Previous studies have implicated both monoamine and peptide neuromodulators in driving sensitization in many species.

“These results are thus important steps towards understanding neuromodulation and multisensory integration,” the study says.

The researchers foresee that their microfluidic device technology “will be powerful in studying a broad range of problems for the multisensory integration in brain, such as arousal, sensitization/desensitization, habituation, and modulations of internal states.”

Description of journal cover image below:

The researchers developed a microfluidic platform that can deliver spatially and temporally controlled combination stimuli to C. elegans to study the functional role of interneurons in multisensory integration. The cover depicts the roundworm being stimulated by mechanical and chemical stimuli in the device. The nervous system integrates these stimuli to generate behavioral outputs - forward, backward, and pause. 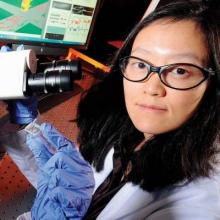