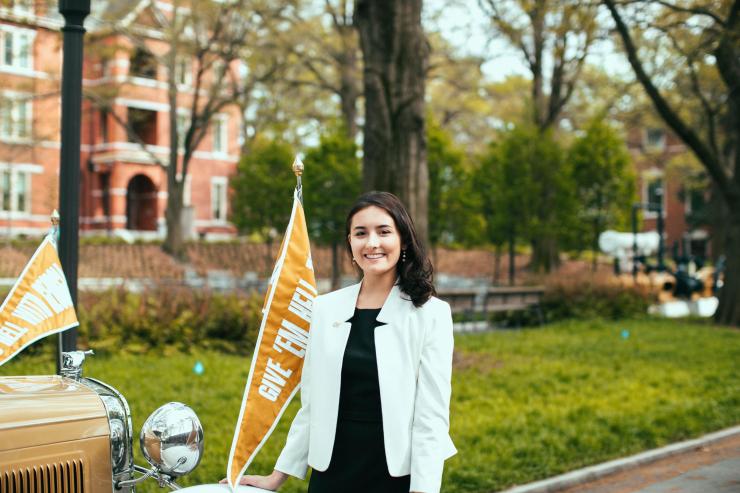 Anna Romanov and Julia Woodall, undergraduate students in the Wallace H. Coulter Department of Biomedical Engineering at Georgia Tech and Emory University, will probably never leave the Earth’s orbit. But they each embody the characteristics of astronauts, such as intelligence, ambition, tenacity, creativity, self-motivation, high ethical standards, and wide ranging interests, like a passion for science, exploration, and innovation.

And, as if all that wasn’t enough to impress you, these two young women now have the support of actual astronauts to help them pursue their hopes and dreams, wherever that may lead.

Romanov and Woodall are winners of prestigious Astronaut Scholarships through the Astronaut Scholarship Foundation (ASF), which was created in 1984 by the six surviving Mercury 7 astronauts to help the United States retain a leadership position in technology and innovation by supporting the best and brightest scholars in science, technology, engineering, and mathematics – the STEM fields – while commemorating the legacy of the nation’s pioneering space explorers.

This is actually a repeat honor for Woodall, who was an Astronaut Scholar last year as well. A rising fourth-year student at Tech who has also won a Goldwater Scholarship, Woodall will spend this fall interning for NASA at the Kennedy Space Center researching the mechanical effects of microgravity on cells.

“ASF is not just for aerospace-oriented student researchers. Many students like me have research in a variety of different science fields,” says Woodall, who is from Cincinnati, but spent this summer in Atlanta at Tech, doing research and working out with the Georgia Tech crew team.

“I conduct research on cell mechanics, specifically on red blood cell fragmentation in clotting disorders,” Woodall explains. “The Astronaut Scholar program does, however, expose you to a variety of different career paths in the aerospace industry, which is quite interesting. Through ASF, I became interested in how microgravity, which causes weightlessness in space, mechanically affects cells.”

Romanov, a rising fourth-year BME student who is minoring in German, is spending the summer as a research intern at Rheinisch-Westfälische Technische Hochschule (RWTH) Aachen University, the largest technical university in German.

“My project is focused on developing modelling techniques for biomedical processes using artificial intelligence,” says Romanov, who grew up in Roswell, just few miles north of the Georgia Tech campus. “I am studying BME and German, this summer experience has been a unique opportunity to combine these two areas.”

Romanov has spent the past several years at Georgia Tech working in the lab of Gabe Kwong, assistant professor in the Coulter Department and a researcher in the Petit Institute for Bioengineering and Bioscience.

“We’ve been developing precise drug delivery methods for immune cells, which may significantly improve immunotherapies for cancer and infections,” she says. “I hope to continue studying precision medicine and immunoengineering as a Ph.D. student. Research has clearly been important in shaping my Georgia Tech experience, and it is actually what made me a candidate for the Astronaut Scholarship. I am really grateful for the coming opportunity to meet hundreds of accomplished engineers through the ASF community. I’m hoping to learn as much as I can through this experience, as both a researcher and leader.”

Both students will attend the Innovators Gala in Washington, D.C., this August, when current and past Astronaut Scholars come together to share their research and meet astronauts and other professionals from the aerospace industry. The program also features a mentorship program in which new scholars are paired with professionals in their fields of interest.

The scholars themselves become a great nationwide network for career opportunities, advice for post-undergraduate paths, and even for social meet-ups when fellow scholars visit each other’s cities, Woodall points out. “The program also has an outstanding staff who are really there to support you,” she notes. “Just as an example, I was having trouble finding housing in Florida for my NASA internship this fall, and the ASF director reached out to a realtor friend of hers in Florida who helped me find housing.”

Woodall, who has won a Goldwater Scholarship, says the ASF awards have helped expand her expectations of what a biomedical engineer can do.

“ASF is similar to other fellowships in that it connects a diverse pool of STEM undergraduates to each other, but it is unique in its connection to the space industry,” she says. “While my career plans have always pertained to biomechanics before, the program has helped me better understand biomechanics applications outside of the medical industry realm. I am excited to intern at NASA, to be exposed to an entirely different industry where my skills and interest in cellular mechanics research are uniquely applicable.”

Beyond academics, Woodall has been involved in athletics at Georgia Tech, including a stint with the women’s soccer team during her first year, and continuing involvement with the Tech women’s CREW team the past two years.

“These experiences have really helped me maintain a balanced and healthy lifestyle,” says Woodall, who grew up in Cincinnati, Ohio. “I’ve always enjoyed athletics, mainly soccer growing up, but I think rowing has been my favorite sport of all. While it has made me a physically strong individual, it has also challenged my mental strength and discipline more than anything else in my life. I have found that even with the additional time the sport takes up in my life, I perform better in academics because of it, all-the-while getting some awesome views of the stars in morning practice and just great outdoors time. Sports has also helped me develop long-term, non-workaholic habits that will surely help me have an enjoyable, balanced life in the future.”

She plans on attending graduate school and will probably pursue an Ph.D. in bioengineering, biomechanics, or possibly mechanical engineering.

“My thinking is that as long as I continue to research the things I love, opportunities will present themselves career-wise,” says Woodall, who uses her passion for athletics as a visioning tool for her research. “Maybe it’s the ‘biomech’ nerd in me, but I think it’s cool to imagine rowing as a large scale, cell motility model, with oars as cilia and the boat hull as the cell body, but my non-BME teammates don’t quite get my fascination with this.”

In addition to her work as an undergraduate researcher, Romanov is co-founder of a startup, TheGirlCodeProject, which helps involve women in STEM (Science, Technology, Engineering, and Mathematics). She also serves a Georgia Tech Student Ambassador.

“I love giving back to the Georgia Tech community that has given me so much,” says Romanov, who also has been a dancer and violinist since she was young and danced a few semesters with the DanceTech Performing company on campus.

She used to believe art and science were distinct disciplines with clearly defined boundaries, but has come to the realization that, “having an artistic background actually helps me with my engineering. A performing arts background ingrained a lot of discipline and patience in me, which are helpful qualities for an aspiring engineer. Another advantage is that engineers who are also artists engage more areas of their brain. This allows us to visualize problems differently and think more creatively.” 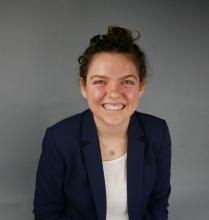