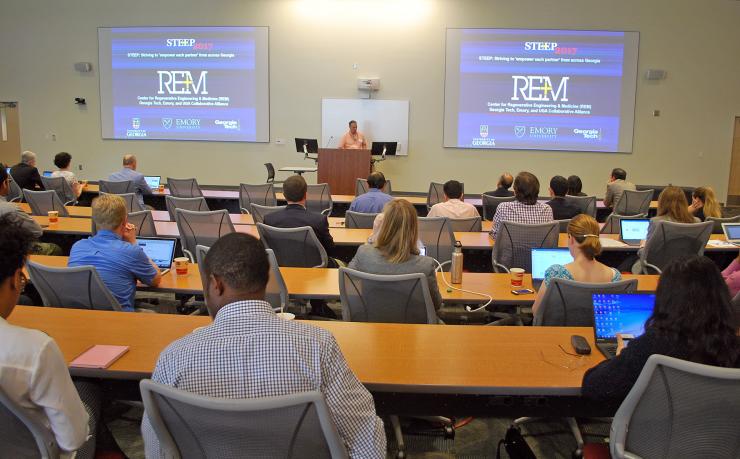 When the Center for Regenerative Engineering and Medicine (REM) gathered for its annual retreat and workshop at the University of Georgia (UGA) in May, there were the usual conversations about interdisciplinary research between the organization’s three partner universities (Georgia Institute of Technology, Emory University, and UGA).

But this time, there was some added excitement over future potential with the introduction of an innovative, additional granting mechanism from the Georgia Research Alliance (GRA). The Allen Fund, a $1 million gift (from Dr. J. David Allen and family), to be disbursed over 10 years to the GRA to advance cellular manufacturing research and development at REM’s three member institutions.

“The Allen gift represents a significant milestone in the partnership between Emory, Georgia Tech, and the University of Georgia, in that this is the first gift that was given to the Georgia Research Alliance specifically to be split between all three partner institutions to support joint projects,” said Johnna Temenoff, Petit Institute researcher and REM co-director from Georgia Tech.

“I believe this is reflective of our collective leadership in the field of regenerative medicine as a whole, and cell manufacturing in particular,” Temenoff added.

Since 2011, the REM has fostered the fundamental transformation of treatment options and outcomes for human disease and injuries through the development and translation of new technologies that boost the body’s ability to heal itself.

GTEC evolved to become REM, an Emory-Georgia Tech initiative until 2014, when UGA and its vaunted Regenerative Bioscience Center (RBC) joined.

“The purpose of these retreats has always been about getting people together from the three institutions to continue the discussion of how we can collaborate on our research,” says Steve Stice, the REM co-director from UGA, where he is a professor and director of the RBC, and a researcher with the Petit Institute for Bioengineering and Bioscience at Georgia Tech. “We’ve been doing this for some time now and some fantastic things that have come from it, and we expect more of that going forward.”

Participants in this year’s retreat also set out to demonstrate examples of commercial and academic success as a way to highlight the impact that traditional REM seed grants have had on fostering collaborative research and commercial translation across the state.

“We then tried to capture that momentum to establish more intra-institutional collaborations through interactions at the poster and speed dating sessions, and make next year’s grants even more successful,” Temenoff said.

Several accounts were shared from fledgling companies that either emerged from REM collaborations, or were assisted by REM interactions and grants, or exist within the realm of regenerative medicine in general. The companies – Sanguina, ArunA Biomedical, and Cambium Medical Technologies – represent the kind of success stories that REM, and its seed grants program, was built for. Since 2010 (a year before the actual launch of the REM center), the seed grants have resulted in nearly $18 million in leveraged funding (a return on investment of over 3:1).

In her presentation on the ‘academic path to success,’ Petit Institute researcher Susan Thomas emphasized the importance of the REM seed grant she and Emory researcher Ian Copland (who passed away suddenly in July 2015) received in 2014-2015. “That grant has helped us expand our research,” she said. “It opened up doors to new directions and additional funding and to new avenues that we’re still exploring.”

Representatives from each REM institution also had a chance to present their distinct SWOT (Strengths, Weaknesses, Opportunities, Threats) analyses before adjourning for a poster session featuring research from previous seed grant winners. Then they moved onto a ‘research speed dating’ networking session. (“Now is the time to practice your elevator speech,” quipped Stice, who wore a referee’s whistle around his neck and used it to move the conversations along).

That was followed by a ‘wrap session,’ to discuss the REM seed grants and how best to utilize those going forward. Seed grant applications for the coming year are due in July.

Ultimately, the goal is to keep the momentum going, and that may include expanding the partnership that currently comprises REM. Present for last month’s gathering were representatives from Augusta University (AU), including David Hess, dean of AU’s Medical College of Georgia.

“It’s great to see this become a broader group,” said Ned Waller, REM co-director from Emory. “The spirit of REM is to encourage collaboration, and a Georgia-wide initiative is to the benefit of everyone.”

Steve Stice welcomes a gathering of researchers to the REM retreat in Athens.