Georgia Tech researchers have successfully engineered synthetic biomimetic cilia and developed a mechanism for manipulating them using magnetic fields in a way that mimics their natural motion to assist in a variety of applications.

Like tiny hairs waving together, cilia are microscopic organelles found throughout nature. In your nose and ears, their metachronal beating helps trap dirt and debris. In the reproductive system, they help the ovum progress through the body and assist the movement of sperm. Given how important they are to the biological world, researchers have wondered if they could reproduce them artificially to assist in microscale motions in a variety of applications.

Artificial cilia apparatus setupThat is where a team of Georgia Tech researchers, which includes Professor Alexander Alexeev, Professor Peter Hesketh, and recent Ph.D. graduate Srinivas Hanasoge, comes in. The group has successfully engineered synthetic biomimetic cilia, and developed a mechanism for manipulating them using magnetic fields in a way that mimics their natural motion. Their results were recently published in ACS Applied Materials & Interfaces in an article titled “Metachronal Actuation of Microscale Magnetic Artificial Cilia.”

“Cells utilize highly complex biomechanical machinery to actuate cilia,” explains Alexeev. “Such machinery is inaccessible in synthetic systems, so the challenge was figuring out how to design relatively simple microscopic devices that can closely mimic the complex three dimensional motion of cilia that can still be fabricated using our current microfabrication technology.”

In their work, the group demonstrated several methods to create arrays of magnetic artificial cilia that are capable of producing metachronal waves. They also showed that they could control the direction of the waves using different types of magnetic actuation.

Cilia being activated by a magnetic field

“The most surprising result was that our relatively simple system that is composed of anchored magnetic filaments and a rotating magnet can produce complex motion that resembles the beating of biological cilia,” said Alexeev.

At large scales in everyday life, fluid mixing does not pose particular challenges, but at the microscale it is a significant obstacle. Alexeev and his collaborators are hoping their findings can be applied to micro and nano devices that operate with extremely small amounts of fluids, including organ-on-a-chip and lab-on-a-chip systems.

The group is also optimistic that their findings will lead to an improved understanding of how cilia functionthat they can be reproduced and manipulated artificially.

“The ability to produce different types of metachronal motion using our synthetic cilia opens a possibility to systematically investigate the effects of ciliary activity and metachrony on different functions performed by biological cilia such as fluid and particulate transport,” explains Alexeev. “This is important for better understanding the biological function of cilia and devising new ways to manipulate minute amounts of fluids at the microscale.“

This research was sponsored by the USDA NIFA (Grant #11317911) and the NSF (CBET-1510884). The cleanroom fabrication was assisted by the staff of Georgia Tech IEN. 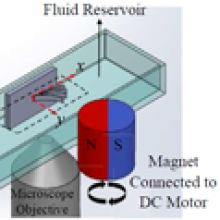