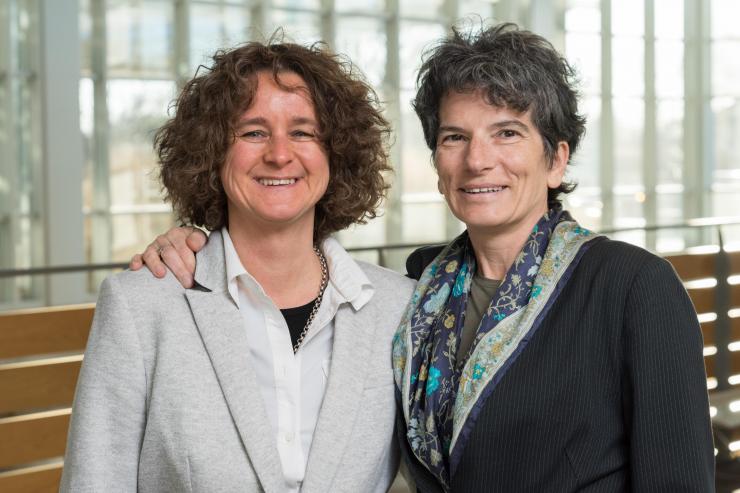 Two charitable foundations have announced their support of research at the Georgia Institute of Technology that could change the basic understanding of DNA, potentially leading to new treatments for degenerative diseases.

The W.M. Keck Foundation and the G. Harold and Leila Y. Mathers Foundation have awarded grants of $1 million and $300,000, respectively, to boost the research of Francesca Storici, professor in the School of Biological Sciences and principal investigator for the projects. Both grants are directed toward decrypting the hidden message of ribonucleotide incorporation in human nuclear DNA.

“We have a lot to learn about the role ribonucleotides play in the structure and function of human DNA,” said Storici, also a researcher with the Petit Institute for Bioengineering and Bioscience at Georgia Tech, whose lab already has contributed much to what the world knows about ribonucleotides, or rNMPs – the basic building blocks of RNA – when they are embedded in DNA.

Storici and her collaborators have developed new tools and techniques to find and characterize rNMPs in DNA. Their studies of yeast DNA suggest that rNMPs aren’t just random “noise,” as had been previously alleged, but rather offer a code – Storici and her colleagues call it “cryptic language,” capable of regulating DNA functions.

The grants will help researchers begin to translate that cryptic language.

“These ribonucleotides may represent novel biomarkers for human diseases such as cancer and other degenerative disorders,” Storici said.

For an organism to grow, its cells must divide. For a cell to divide, its DNA must replicate. In humans, nearly 2 trillion cells divide every day. DNA polymerases, enzymes that facilitate DNA replication, mis-incorporate – or incorporate – rNMPs. These embedded rNMPs are known for changing the character of DNA and posing a threat to genomic stability.

Storici’s lab developed and tested a technique called ribose-seq that let them determine the whole profile of rNMPs incorporated into yeast DNA. Using ribose-seq, they discovered hot spots and patterns where rNMP insertions accumulate – accumulations that were assumed to be random noise.

Based on their recent findings, the researchers hypothesize that some rNMPs form specific motifs, or cryptic words, in human DNA, comprising previously hidden signals for specific metabolic functions of DNA, such as gene expression and replication.

“We don’t think this cryptic language of ribonucleotides is random. So, our goal is to decode the cryptic language,” Storici said. “Currently, we know nothing about that. There may be a particular sequence, or patterns of regularity that we can identify.”

Using ribose-seq to map rNMPs in DNA, via next-generation sequencing, and a computational toolkit they developed called Ribose-Map, the Storici team will build libraries of rNMP sites from a number of human cell types.

Through bioinformatic analyses and computational methods, they intend to identify and decipher the cryptic words of rNMP incorporation, “setting the stage to discover rNMPs’ role,” Storici said.

The foundations are both supporting the same scope of work, but at different scales, and the researchers will work with different human cell lines for each grant.

The Mathers Foundation will cover work with the Storici lab only. The Keck Foundation is supporting a collaborative effort between Storici and Natasha Jonoska, professor of mathematics at the University of South Florida. Both Storici and Jonoska are founding members of the Southeast Center for Mathematics and Biology.

“Through the combination of our molecular biology tools at Georgia Tech, with Natasha’s mathematical expertise in modeling and data analysis, there is great potential here for a big breakthrough – for developing a greater understanding of the biology of the human genome,” Storici said.

About The G. Harold and Leila Y. Mathers Foundation

The mission of The G. Harold and Leila Y. Mathers Foundation is to advance knowledge in the life sciences by sponsoring scientific research that will benefit humankind. Basic scientific research, with potential translational application, is central to this goal. Since commencing grantmaking activities in 1982, the Mathers Foundation has granted more than $350 million. For many years, the foundation has enjoyed special recognition in the research community in supporting basic scientific research, realizing that true transformative breakthroughs usually occur after a thorough understanding of the fundamental mechanisms underlying natural phenomena. More recently, and with the advent of newer investigative methodologies, technology, and tools, the foundation now embraces innovative translational research proposals.

About the W.M. Keck Foundation

The W.M. Keck Foundation was established in 1954 in Los Angeles by William Myron Keck, founder of The Superior Oil Company. One of the nation’s largest philanthropic organizations, the W.M. Keck Foundation supports outstanding science, engineering, and medical research. The foundation also supports undergraduate education and maintains a program within Southern California to support arts and culture, education, health, and community service projects.

About the Georgia Institute of Technology

The Georgia Institute of Technology, or Georgia Tech, is a top 10 public research university developing leaders who advance technology and improve the human condition.

The Institute offers business, computing, design, engineering, liberal arts, and sciences degrees. Its nearly 40,000 students, representing 50 states and 149 countries, study at the main campus in Atlanta, at campuses in France and China, and through distance and online learning.

As a leading technological university, Georgia Tech is an engine of economic development for Georgia, the Southeast, and the nation, conducting more than $1 billion in research annually for government, industry, and society.