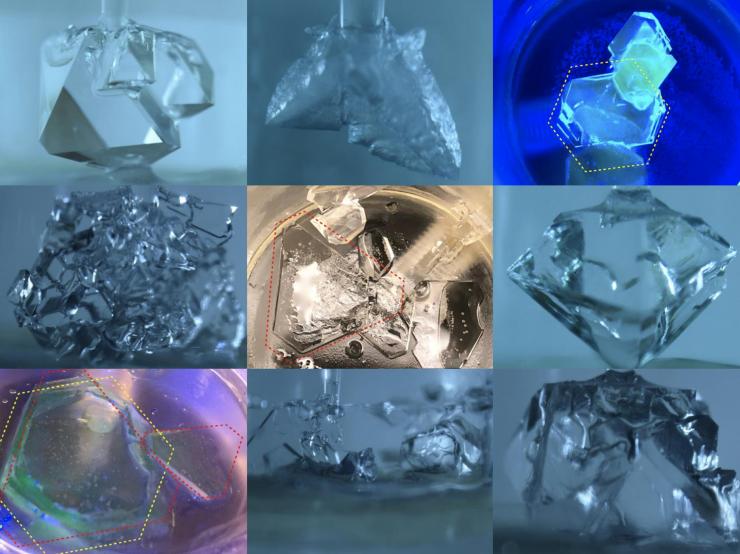 When it comes to gas clathrates — collections of water molecules that can trap gas inside a lattice-like crystal structure — science sees them as potential friends and foes.

They’re friends because clathrate-trapped natural gas could be another source of energy for the oil and gas industry. Yet clathrates are also foes if they heat up too fast inside offshore wells. They can rapidly expand with dangerous results, as was suggested in the 2010 Deepwater Horizon oil spill. Clathrates buried deep within the Arctic permafrost can also trap methane, which is a major greenhouse gas, and rising global temperatures could unlock those chilly 'crystal cages' and add to climate change concerns.

If science can figure out a safe, eco-friendly way to manipulate clathrates, then a wide range of disciplines and industries could benefit from the applications. A unique interdisciplinary team of Georgia Tech researchers may have found a way to accomplish that goal, using proteins embedded in bacteria from deep below the Earth’s surface to bind to clathrates and change them.

“Mainly on the Plane: Deep Subsurface Bacterial Proteins Bind and Alter Clathrate Structure”, published July 23 in Crystal Growth & Design (an American Chemical Society publication) is the result of a 2018 grant from the NASA Exobiology program. The researchers are Abigail Johnson and Jennifer Glass from the School of Earth and Atmospheric Sciences, Dustin Huard and Raquel Lieberman from the School of Chemistry and Biochemistry, Priyam Raut from the School of Biological Sciences, and Sheng Dai and Jongchan Kim from the School of Civil and Environmental Engineering.

The petroleum industry currently tries to slow and cool off clathrates in pipelines and wells with synthetic compounds, but “there is a strong need for alternative, ‘green,’ antifreeze materials” to lower the temperature at which hydrates (clathrates) will form, says Lieberman, a professor in the School of Chemistry and Biochemistry. “While antifreeze proteins derived from cold water fish show some promise, our unique proteins come from those found in microbes that natively inhabit gas clathrates, and thus hold promise as more potent and tailored inhibitors of natural gas clathrate.”

Making protein magic in the lab

The researchers found that their cocktail of protein-embedded bacteria changed the structure of clathrate crystal lattices to “polycrystalline and plate-like, instead of forming single, octahedral crystals,” as the study’s abstract notes.

“A big takeaway here is that this is one of the very first times that any group has created proteins in the lab using bacterial gene sequences from Earth’s deep biosphere,” says Glass, an associate professor in the School of Earth and Atmospheric Sciences. “Deep biosphere” refers to organic materials found beneath the Earth’s surface. “Due to the great difficulty of culturing and isolating microbes from the deep biosphere, we have taken the approach of expressing these novel proteins recombinantly, using workhorse bacteria like E. coli.”

Glass says the study shows scientists can make these proteins in the lab and that they are stable enough to use in experiments. “This opens up huge possibilities for exploring functions of novel proteins from the deep biosphere in our laboratories. It’s possible these proteins could have use in biotechnology, medicine, industry, environmental remediation, and many other fields.”

Huard, a research scientist in the School of Chemistry and Biochemistry, marvels at how nature is capable of evolving simple yet elegant solutions to complex problems like figuring out clathrate structure. A simple amino acid sequence, when blended into proteins that bind to clathrates, “allows for organisms to thrive in extremely harsh, cold environments,” he says.

Huard adds that clathrates are known to exist elsewhere in the solar system. “Our clathrate-binding proteins, produced by bacteria, could provide a clue as to how life might survive on other planetary bodies that have gas clathrates, such as Mars.”

Don’t forget about discoveries in the past few years about the role methane clathrates may play in maintaining subsurface liquid oceans on icy moons and planetary bodies in the outer solar system, adds Glass. “Gas clathrates are thought to be possible habitable zones for microbial life. I’m very excited to connect our research to results from future [NASA] missions.”

The full extent of the capabilities of clathrate-binding proteins is not yet known, Huard says. For example, the food industry could benefit if the proteins also inhibit ice growth, since antifreeze proteins are already found in many food products.

The perfect mix of Georgia Tech researchers and disciplines

Huard researches in Lieberman’s lab, which has produced studies of the protein structure found in certain forms of glaucoma. Lieberman and Huard ended up being part of a team that Glass says illustrates Georgia Tech’s interdisciplinary strengths.

“This project is a perfect example of the exciting results that emerge when fields that often don’t talk come together to try something new,” Glass says. “Our team at Georgia Tech is truly one of the only in the world, to my knowledge, that has the scientific and engineering expertise to do this work.”

The clathrate project brought together marine microbiologists and geochemists from the Glass Lab, bioinformaticians from the Georgia Tech Bioinformatics Graduate Program, and geosystems engineers. It was catalyzed by the Ocean Science and Engineering program (OSE), in which doctoral candidate Johnson is an inaugural class member. “OSE uniquely encourages graduate projects on ocean-related research that bridge the disciplinary divides between marine science and engineering,” Glass says.

The impact of clathrates on climate science

For Johnson, the study afforded her an opportunity to offer a better understanding of clathrates, which have trapped methane under the ocean floor and deep in the Arctic permafrost.

Clathrates “basically occur anywhere there is low temperature, high pressure, water, and sufficient gas concentrations,” Johnson says. “Gigatons of methane, a known potent greenhouse gas, are stored in gas clathrates. A warming global climate could cause clathrate dissociation, potentially leading to a disastrous snowball effect. This is why it’s so critical that we have a firm understanding on the forces controlling clathrate stability.”

Johnson says the role microbiology plays in that stability is important to consider but has not been well researched. “Our study elucidates a potential role that bacteria have in stabilizing gas clathrates by producing CBPs (clathrate binding proteins). We found that CBPs bind and significantly change the morphology of the clathrate structure, which hints at a potential role in stability. Our future research will help us determine if these CBPs work to inhibit or nucleate (crystallize) gas clathrate. We hypothesize that CBPs are secreted by bacteria into their fluid habitat within the clathrate, and then bind to the clathrate, thereby inhibiting further clathrate growth; this mechanism would allow the bacteria to maintain their fluid habitat." 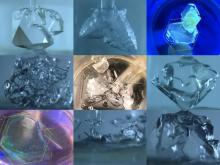 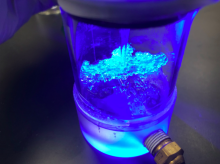 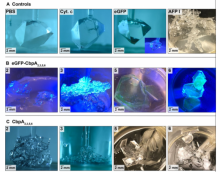 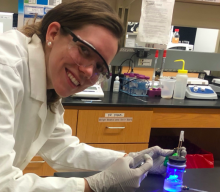 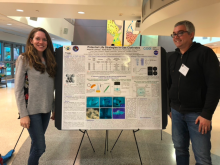 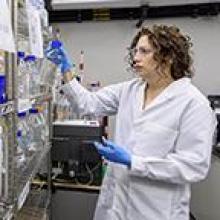 If science can figure out a safe, eco-friendly way to manipulate clathrates, then a wide range of disciplines and industries could benefit from the applications. A unique interdisciplinary team of Georgia Tech researchers may have found a way to accomplish that goal, using proteins embedded in bacteria from deep below the Earth’s surface to bind to clathrates and change them.