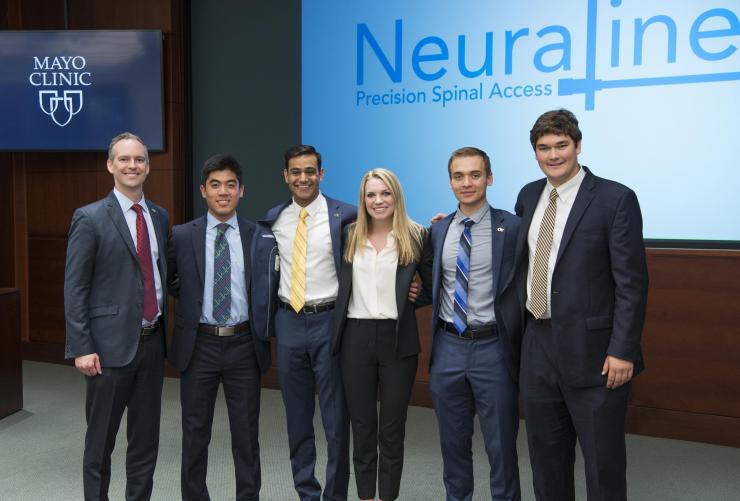 Larry Huang has made a career of turning good ideas into tangible results.

Since graduating from the Georgia Institute of Technology with a degree in industrial management in 1973, he’s been an entrepreneur, helping to create billion-dollar companies. He’s been a race car driver, competing in the NASCAR Rolex Grand-Am Sports Car series. A former member of the Georgia Tech Foundation Board of Trustees, he’s been a philanthropist, endowing the Lawrence P. Huang Chair in Engineering Entrepreneurship (currently held by David Ku, researcher in the Petit Institute for Bioengineering and Bioscience at Georgia Tech.

Recently, Huang has taken on a new role: matchmaker. Through a series of events that he encapsulates as “a really serendipitous situation,” Huang linked Mayo Clinic in Jacksonville, Florida, with a team of interdisciplinary Capstone Design students at Georgia Tech, forging a new collaboration in the evolving relationship between Mayo and Tech’s bio-community.

“It’s the classic win-win scenario,” says Huang, who is a patient at Mayo, where his reputation preceded him – Huang’s generosity had previously nourished Mayo Clinic Ventures, and he’s been trying to jumpstart technology infrastructure in Jacksonville since moving to the area 18 years ago, “with limited success,” he says.

But the southern stars are aligning as Mayo Clinic is in the midst of a massive $330 million expansion on its Florida campus, “to enhance research and innovation,” according to Gianrico Farrugia (physician and CEO of Mayo Clinic’s Florida campus) and Tushar Patel (physician scientist and Mayo’s Dean for Research in Florida), in a newspaper editorial they co-wrote last year.

“Mayo has a tremendous amount of intellectual property, and they’re building an incubator to commercialize that, they want to develop a start-up hub for the Southeast. But it became obvious to me right away that there is a missing piece,” says Huang, who met with Charles Bruce, M.D., the Mayo physician leading the effort. “You can have all the intellectual property, the clinicians, the technical and scientific knowledge, but in order to build a product or a service, you need engineers and a business plan.”

Going to the Source

Since Huang had graduated, a thriving bioengineering and biomedical engineering community had emerged at Georgia Tech, so he knew exactly where to turn. Huang brought Mayo’s planners together with leadership at Georgia Tech, including Petit Institute Executive Director Bob Guldberg, Scheller College of Business Dean Maryam Alavi, and James Rains, who directs the Capstone program for the Wallace H. Coulter Department of Biomedical Engineering (BME) at Georgia Tech and Emory University.

“So we started looking for Capstone teams with a real entrepreneurial interest, and a lot of people applied,” says Rains. Ultimately, they selected an interdisciplinary team of five biomedical and mechanical engineering students that called itself – of course – Cinco de Mayo.

The team has three BME students: Dev Mandavia, Marci Medford, Cassidy Wang; and two from the Woodruff School of Mechanical Engineering: Alex Bills and Lucas Muller. If there was an ace in the hole, it was probably Mandavia, who has valuable experience when it comes to competitive entrepreneurial endeavors. He helped lead the BME team (CauteryGuard) that won last year’s Georgia Tech and Atlantic Coast Conference InVenture Prizes.

Cinco de Mayo actually got a head-start on its spring semester Capstone project, making trips to Jacksonville before the semester to meet with clinicians. According to Medford, they conducted about 200 interviews with personnel at Mayo, as well as the Piedmont and Grady health systems in Atlanta.

“We decided to focus on epidurals, because we realized there are so many complications related to the procedure, and we felt that we could make an impact,” says Medford.

The team considered about 10 different problems supplied by Mayo clinicians, asking itself, “what is going to have the biggest impact and be the easiest to implement, that last part being pretty important,” says Mandavia. “Having gone through the process of developing a medical device last year with CauteryGuard, I knew that you can create the best thing in the world, but if nobody’s interested in using it, you can’t really impact change.”

They focused on the delivery of neuraxial anesthesia (like an epidural), used extensively in the obstetric setting to alleviate pain during childbirth. With an epidural, a needle is inserted into the back to deliver drugs into the space around the spinal cord. Currently, these procedures are conducted without imaging or precise feedback that could alert the physician where and how deep to insert the needle.

“The clinical issue is getting guidance or feedback when gaining access to the epidural and intrathecal space,” says cardiologist/cardiac electrophysiologist K.L. Venkatachalam, M.D., one of the clinicians that worked with the Capstone team. “This is presently done with a special needle and most procedures are done simply based on anatomic considerations, with very little feedback about optimal position and angle of the needle.”

So, physicians are virtually blind, depending on tactile feedback and “loss of resistance” upon entry into the epidural space. Proficiency is gained and maintained only through continuous practice. Meanwhile, multiple attempts are usually made to place the needle, increasing pain and the risk of complications.

“This is a standard practice in labor and delivery,” Mandavia says. “These procedures are done millions of times a year. You can’t use fluoroscopy or X-rays, because you expose the baby to harmful radiation.”

The current version of the ‘NeuraLine’ device they developed uses bioelectric impedance analysis and/or force sensing, allowing physicians to identify entry into specific anatomical spaces. Other modalities may also be explored. The Cinco de Mayo team will have a better sense of its next steps following a May 4th meeting at Mayo, an opportunity to show and tell for an audience of clinicians and experts.

First, they unveiled the product at the spring semester Capstone Design Expo (April 24), a competition won by a BME team called Kit Cath. Then they spent the next week and a half preparing for the meeting at Mayo, which Mandavia described as, “a culmination of everything we’ve done, the steps we took to get here, the prototyping, the iterations, the user interviews, everything that went into it, and also a look into the future. We really think this is something that could impact a lot of people.”

Their device aims to improve clinical confidence, minimize complication rates, and eliminate the steep learning curve of the current practice. Accounting for all neuroaxial procedures in the U.S., the team estimates the total addressable market to be $5 billion. The team plans to devote itself to further development of the device this summer.

And going forward, professor of the practice James Rains envisions an ongoing relationship between the Mayo Clinic and BME Capstone teams, “in which we connect these outstanding young engineers with leading physicians to solve clinical problems.”

This kind of cross pollination between disciplines, between engineering students and clinicians, “is crucial in coming up with solutions to this problem,” says Venkatachalam. “This was a great example of working together to come up with a viable, inexpensive solution.”

The students and Mayo clinicians kept in touch throughout the process with weekly video conferences, looking at various approaches, as well as several face-to-face meetings, which allowed the physicians to show the engineering students the clinical arena and the challenges health care providers face during the procedure.

“I thought the students were bright, enthusiastic, and motivated to succeed,” Venkatachalam says. “I was pleased to see them step back to get a good understanding of the big picture, including the clinical need and the potential market.”

For Larry Huang, the value of partnering with Capstone students is something he became well acquainted with last year, when he tapped a team of mechanical engineering (ME) students to redesign the intake system for the air box on one of his race cars.

But this latest experience with the interdisciplinary team of BME and ME students gets closer to the core of what has driven him for more than 40 years.

“I’ve been interested in the commercialization of technology for a long time,” Huang says. “It’s because I’ve always thought that this is a way to really make people’s lives better while also creating value.” 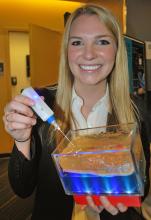 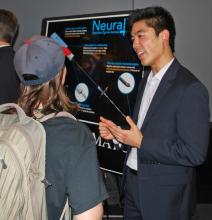