Dahlman on the CRISPR Cutting Edge

BME/Petit Institute researcher at forefront of revolution in gene editing

If there truly is a golden age of biological research taking shape on the horizon, thanks to the groundbreaking gene editing technique called CRISPR-Cas9, then James Dahlman is standing on its front doorstep.

Dahlman, who came to the Georgia Institute of Technology this spring, spent the last few years as a postdoctoral fellow at the Broad Institute of MIT and Harvard. There, he worked in the lab of Feng Zhang, a leader in the utilization of CRISPR-Cas9, which has proven to be faster, easier, cheaper, and more precise than all previous methods of modifying the genetic code.

Since 2013, when Zhang and his colleagues in Cambridge, Massachusetts, became the first to successfully adapt CRISPR-Cas9 for genome editing in eukaryotic cells, the technique has been called a world-changer and the biggest biotech discovery of a century that has barely begun.

Scientists anticipate using CRISPR to correct disease-causing genes in humans, or insert genes that can protect against disease, or eradicate Zika-carrying mosquitoes, or design hardier crops and clean energy alternatives.

And speculators are betting big – last year alone, more than $200 million was reportedly invested in start-up companies developing CRISPR technologies. One estimate puts the figure at $600 million since 2013.

“It’s a total revolution,” says Dahlman, an assistant professor in the Wallace H. Coulter Department of Biomedical Engineering who also recently joined the community of multidisciplinary researchers in the Petit Institute for Bioengineering and Bioscience.

“What CRISPR allows us to do is study, very directly, very rapidly, how genetic changes – either a gene being deleted or a gene being turned on – directly affect whatever disease or cellular activity you’re interested in studying,” Dahlman says. “CRISPR-Cas systems are, in real time, revolutionizing biology. They are revolutionizing the way that we do biomedical science.”

As with any revolution, there is plenty of unrest and controversy to counter the big dreams and high hopes woven into the global CRISPR frenzy.

For one thing, with so much money and prestige at stake, there has been a contentious courtroom dispute over the patent between the Broad Institute and the University of California-Berkley (both institutions performed pioneering, first-of-its-kind CRISPR research).

For another, there’s a question of ethics. CRISPR (an acronym for clustered regularly interspaced short palindromic repeats) brings the world a gigantic step closer to developing species-specific bioweapons and last year, scientists in China reported they had edited the genetic code of human embryos, resulting in an outcry from other researchers, who have urged a moratorium on such work.

But Dahlman is interested only in establishing a lab that will work on improving the human condition through next generation medicine.

“My lab is focused on genetic drug delivery, on the design of nanotechnology for the delivery of genetic drugs, delivering little pieces of DNA or RNA to cells to directly manipulate the gene expression of those cells in order to treat disease,” says Dahlman, who studied in vivo genome editing using CRISPR-Cas9 in Zhang’s lab.

Dahlman’s research encompasses genomics, drug delivery, nanotechnology, and RNA, with the goal of radically improving the way gene function is studied. His work has been centered on developing genetic medicines that can target complicated combinations of genes simultaneously.

He’s already received some substantial backing to support his research at Georgia Tech in a range of areas, including hemophilia, cystic fibrosis and most recently, Parkinson’s disease (thanks to a three-year grant from the Parkinson’s Disease Foundation). It’s an early stage investment for the long haul.

The therapeutic applications of CRISPR-Cas9 may take a while to develop, Dahlman says, “but scientifically, the potential has already been realized.”

Nature has realized the potential for millennia.

Microbes have used CRISPR for millions of years to defend themselves – the CRISPR molecule is comprised of repeating genetic code sequences interrupted by “spacers,” or remnants of genetic code from past invading pathogens.

Though the discovery of CRISPR goes back 30 years, it was only recently that scientists figured out how to engineer it to selectively edit the genome in living cells.

After investigating for decades how bacteria use CRISPR, researchers leveraged that knowledge into developing a precision gene-editing tool.

“But it’s a tool that originated from nature, that we have engineered,” Dahlman says. “It’s basically an immune system that’s built into a single bacterial cell. Bacteria and viruses have been duking it out forever. In order to defend against a viral attack, different bacterial species developed what is an immune system to actually delete and then activate and remember the viral DNA sequences that attacked previously.”

Basically, the CRISPR-Cas9 system consists of two critical molecules that introduce a change, or mutation, into DNA.

One is Cas9, an enzyme that behaves like a molecular scalpel, cutting DNA’s double strands at a specific location in the genome. The other is gRNA, or ‘guide RNA,’ which is designed to locate and bind to a specific target sequence in the DNA, guiding Cas9, ensuring the enzyme makes the right cut in the right place in the genome. The system can be used to neutralize or “knock out” a gene, and if necessary, paste in a new gene between the cut strands.

CRISPR-Cas9, Dahlman says, has been “built on other gene editing technologies that have been developed for a long time.”

Zinc Finger nucleases, for example, and TALEN are older technologies still in use.  “People have done some fantastic work with them,” Dahlman adds. “But at this point, it appears that CRISPR-Cas9 is easier to use than those technologies.”

Easier, cheaper, and more accurate.  Researchers already are using CRISPR to fight HIV, blindness, and antibiotic resistance, among other things. The use of the technique is widespread, and Dahlman brings ground-floor expertise in the technique to his role at Georgia Tech, where he’s finding a deep well of potential collaborators.

“I have to have collaborators around me, or I’m not being helpful to anyone,” he says. “The bioengineering and biomedical engineering infrastructure and the researchers here are world class. It felt like a place where I could share my technology with people and they would actually use it to do cool science.” 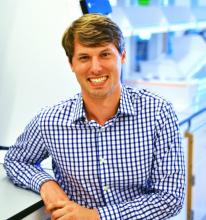 James Dahlman, assistant professor in the Wallace H. Coulter Department of Biomedical Engineering and researcher in the Petit Institute for Bioengineering and Bioscience.