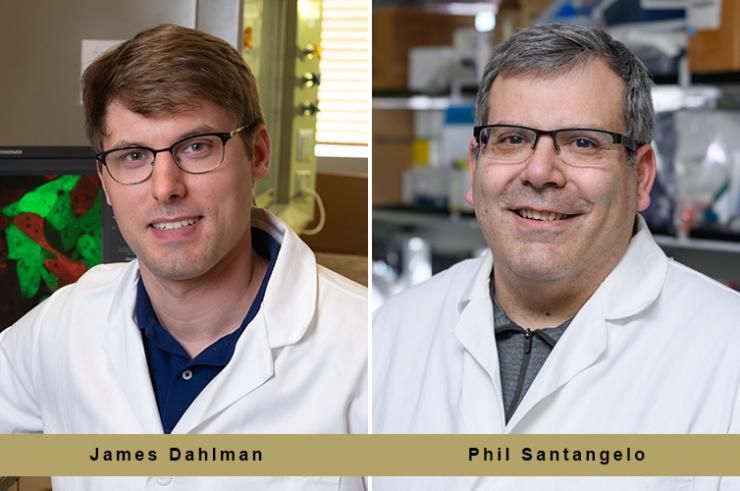 Phil Santangelo, professor, and James Dahlman, assistant professor, in the Wallace H. Coulter Department of Biomedical Engineering at Georgia Tech and Emory University, were awarded a $3.5 million National Institutes of Health (NIH) grant to create an mRNA-based drug that safely and specifically corrects hematopoietic stem cells (HSPCs) using gene-editing. Hematopoietic stem cells are stem cells that give rise to other blood cells. By creating an mRNA-based drug that safely edits HSPCs, the project aims to advance gene editing as a viable therapeutic approach for blood disorders, such as sickle cell disease.

As co-principal investigators, they aim to iteratively evolve new drug delivery nanoparticles that target HSPCs in vivo, reduce mRNA immunogenicity (reduce the immune response to make this type of treatment more effective), and further analyze gene editing. They will work with Francois Villinger, a professor at the University of Louisiana Lafeyette. The team will combine a DNA barcoded nanoparticle technology to screen thousands of nanoparticles in vivo, synthesize mRNA-based drugs with low immunogenicity and cell type-specific expression, and utilize a customized bioinformatics pipeline that facilitates ‘big data’ nanoparticle experiments to more quickly identify treatment options.

The project is being funded by the NIH Somatic Cell Genome Editing program. Making changes to a patient’s DNA can have powerful implications for the treatment of disease. To tap into this immense potential, NIH recently awarded 24 Somatic Cell Genome Editing grants — totaling approximately $89 million over the next four years — to support research aimed at improving methods to edit the human genome.

A genome is an individual’s complete set of DNA, the molecules that carry genetic information. Many diseases are caused by DNA changes that can be inherited from parents or can happen during a person’s lifetime. In the past decade, scientists have developed techniques to edit DNA in order to treat disease. The newly awarded grants focus on editing DNA in somatic cells, which are cells in the body other than reproductive cells. Since somatic cells do not pass DNA to the next generation, genome editing changes in somatic cells cannot be inherited.

“I am excited to be working with Professors Santangelo and Villinger, and am grateful to the NIH for funding it,” said Dahlman. He added, “all three of us hope to make scientific discoveries that help patients suffering from genetic disease.”

Examining bacteria growing on toddlers’ teeth, Marvin Whiteley and a team from the University of Pennsylvania found microbes’ spatial organization is crucial to how they cause tooth decay.