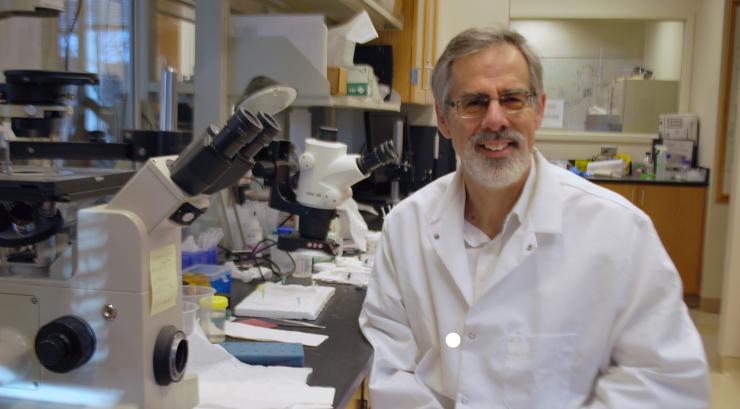 Glaucoma, the leading cause of irreversible blindness, has one modifiable risk factor: ocular hypertension, or elevated intraocular pressure (IOP). If you lower IOP effectively, you can slow progress of the disease. And there you have a very big ‘if,’ because available treatments generally do not target – or they intentionally bypass altogether – the diseased and stiffened glaucomatous outflow tissues responsible for elevated IOP.

But recent discoveries in Ross Ethier’s research focusing on the properties of a spongy, critical tissue in the eye called the trabecular meshwork include the development of a better tool and also a potential new treatment method, which would signify a one-two punch in the fight against glaucoma, providing answers and hope for people grappling with the disease.

Ethier is a Georgia Research Alliance Distinguished Scholar in the Wallace H. Coulter Department of Biomedical Engineering and a researcher in the Petit Institute for Bioengineering and Bioscience where his lab is striving to transform a clearer understanding of glaucoma into new and better therapeutics down the line.

Last month saw the publication of a paper in the journal Proceedings of the National Academy of Sciences that demonstrates a new technique for assessing outflow tissue stiffness, now understood to be closely related to ocular pressure. In a global research effort that included investigators from the U.S. and the U.K., Ethier was a corresponding author of the paper entitled, “In vivo measurement of trabecular meshwork stiffness in a corticosteroid-induced ocular hypertensive mouse model, which is a reflection of tissue function and in the assessment of glaucoma.”

“You can’t really know about something that you can’t measure, so here we’ve come up with a way to directly measure the properties of the trabecular meshwork, using imaging hardware and technology that is available in every eye doctor’s office,” said Ethier.

Then, at the SPIE Photonics West conference in San Francisco, Ethier delivered a keynote address describing nanotechnology to actively deliver stem cells to a targeted area in the eye to treat glaucoma. “Putting stem cells into the trabecular meshwork can restore tissue function in patients,” Ethier said. “We hope that eventually stem cells will offer a novel therapeutic option for intraocular pressure control.”

A Better Look at the Eye

Corticosteroids are used in a range of circumstances, including at the eye clinic to reduce inflammation. One of the potential side-effects of optical corticosteroid treatment, unfortunately, is elevated IOP. If left untreated, that typically leads to glaucoma.

“Let’s say you’re exposed to something and you have a terrible allergic reaction in one of your eyes, and it becomes inflamed,” Ethier proposes. “So the doctor prescribes steroid drops for your eye.”

In this scenario, both you and the doctor know that about 35 percent of patients develop worrisome pressure the eye that can lead to something called steroid-induced glaucoma.

Elevated IOP is characteristic of most forms of glaucoma, including the steroid-induced kind. IOP is normal when the fluid produced by the eye can flow freely through the spongy trabecular meshwork (TM) tissue and then eventually into the blood system. But with glaucoma, fluid does not flow freely through the TM, causing elevated pressure and, eventually, vision loss.

Ethier’s team used nanotechnology to create a novel mouse model of IOP that functionally and morphologically resembles human IOP. With that model, the researchers interrogated the biomechanical properties of the TM, using spectral domain optical coherence tomography (SD-OCT) – standard equipment in a modern ophthalmologist’s toolkit, though typically used to look at the back of the eye.

Looking at the front of the eye with high-resolution SD-OCT, “we could see how obvious it was that the steroid treatment had changed the properties of the trabecular meshwork,” said Ethier, who envisions the non-contact, non-invasive technique ultimately being deployed to the clinic, for human eyes. “This technology has the potential to monitor recently-approved treatments that target the outflow tissues, and to inform glaucoma surgery decisions, leading to better clinical outcomes.”

Ethier’s keynote lecture (Saturday, Feb. 2) in San Francisco, entitled “How Imaging is Informing Diagnosis and Treatment of Glaucoma,” brought him right back to the trabecular meshwork as he outlined a new nanotechnology designed to steer stem cells there, in order to treat glaucoma.

“All current treatments try to lower eye pressure, but they are often unsuccessful,” Ethier said, who explained that in glaucoma patients, the TM (which essentially controls eye pressure), “has fewer cells, which presumably impedes tissue function.”

He described his research using nanotechnology to develop a system to direct stem cells to the TM, “to restore tissue function in patients.” This work is being conducted collaboratively with another BME professor and Petit Institute researcher, Stanislav Emelianov, who holds the Joseph M. Pettit Chair in the Coulter Department.

The key technology involves superparamagnetic and photosensitive nanoparticles (in this case Prussian blue nanocubes, or PNBCs). Their superparamagnetic properties mean that cells which have been given these nanoparticles can be rapidly steered to the TM by a magnet placed at the limbus (the border area of the cornea). The photosensitivity allows cells to be visualized by ultrasound or photoacoustic imaging in a living eye.

Ethier’s lab uses magnetic nanoparticles to label mesenchymal stem cells (MSCs), magnetically steering them to the TM, which is in the eye’s anterior chamber. In Ethier’s research, PBNC-labeled stem cells show increased delivery to the TM after only 15 minutes of exposure to a magnetic field.

“In glaucoma patients, these stem cells could be delivered to the entire circumference of the TM,” Ethier said. “Which is not possible without magnetic steering.”

Photonics West is a collection of multiple conferences produced by SPIE (the International Society for Optics and Photonics) under one large umbrella at San Francisco’s Moscone Center (Feb. 2-7). Ethier made his presentation at the Optical Elastography and Tissue Biomechanics conference.