Antibiotic-testing platform gets a shot at commercialization

Antibiotic-testing platform developed by a team that includes Peter Yunker gets a shot at commercialization. 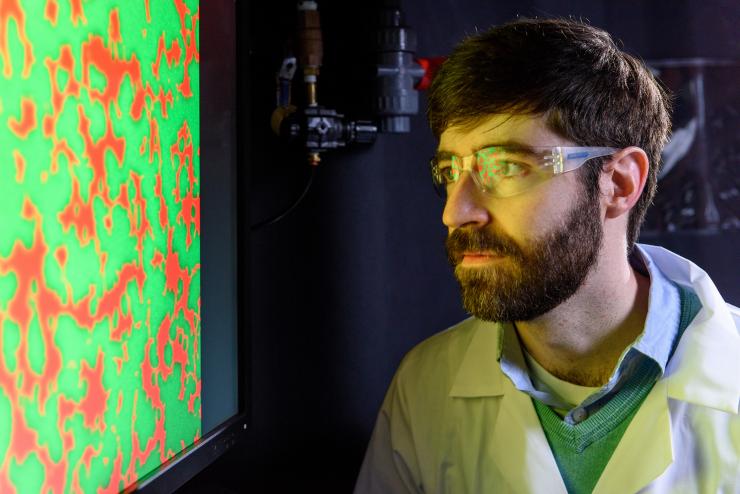 A team with promising technology to combat antibiotic resistance has received funding to accelerate commercialization. The team includes David Weiss, a clinical investigator and associate professor of infectious diseases at Emory University, and Peter Yunker, an assistant professor in the School of Physics. A biophysicist, Yunker is the team’s technical investigator.

Weiss and Yunker are developing a testing platform to quickly identify combinations of antibiotics to treat patients with highly resistant infections. Resistance to antibiotics is rising to dangerously high levels all over the world. According to the Centers of Disease Control & Prevention, antibiotic-resistant infections cause 23,000 deaths per year in the U.S. alone.

Details of the technology are under wraps, pending approval of a patent application. Its basis however is bacteria’s response to antibiotic.

Bacteria are currently classified as resistant or susceptible to an antibiotic. However, Yunker says, many bacterial populations consist mostly of antibiotic-susceptible cells along with a few antibiotic-resistant cells. When only a small subpopulation of bacteria is resistant to an antibiotic, the bacteria is said to be heteroresistant to that drug. “In fact, about 25% of bacteria-antibiotic combinations are heteroresistant,” Yunker says. “This form of resistance is undetectable by current diagnostics.”

When heteroresistant bacteria are treated with a drug that kills susceptible cells, the unaffected resistant cells multiply rapidly. The treatment fails and resistant strains strengthen their grip on the infection.

The team believes that heteroresistant bacteria ought to be treated with an antibiotic combo, one to attack susceptible cells, and the other to knock out resistant cells. “This strategy can kill even strains classified as ‘pan-resistant’ and thus thought to be untreatable,” Yunker says. “For these reasons, detecting heteroresistance is critical to addressing the crisis of antibiotic resistance.”

The technology to detect heteroresistance is one of five promising biomedical research innovations to receive funding for commercialization from Biolocity. Biolocity provides university innovators with resources to advance translational science. Its funding comes primarily from Georgia Institute of Technology and Emory University.

The team received $220,000 for one year. Weiss and Yunker will use the funding to continue developing their technology and prove that it works. “We are also being advised by the Biolocity team, who are experts on commercialization,” Yunker says. “This has already proven to be invaluable, as they provide us with expertise on the business side that will be necessary to make the leap to commercialization."

A. Maureen Rouhi, Ph.D.
Director of Communications
College of Sciences