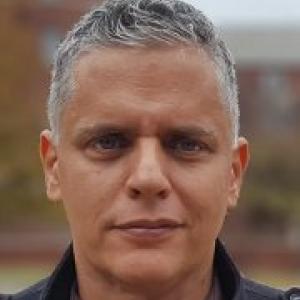 Gil Weinberg is a professor in Georgia Tech’s School of Music and the founding director of the Georgia Tech Center for Music Technology, where he leads the Robotic Musicianship group. His research focuses on developing artificial creativity and musical expression for robots and augmented humans. Among his projects are a marimba playing robotic musician called Shimon that uses machine learning for jazz improvisation, and a prosthetic robotic arm for amputees that restores and enhances human drumming abilities. Weinberg has presented his work worldwide in venues such as The Kennedy Center, The World Economic Forum, Ars Electronica, Smithsonian Cooper-Hewitt Museum, SIGGRAPH, TED-Ed, DLD and others. His music has been performed with orchestras such as Deutsches Symphonie-Orchester Berlin, the National Irish Symphony Orchestra, and the Scottish BBC Symphony while his research has been disseminated through numerous journal articles and patents. Weinberg received his M.S. and Ph.D. in Media Arts and Sciences from MIT and his B.A. from the interdisciplinary program for fostering excellence in Tel Aviv University.

Research in the Center is conducted under four main research groups: music informatics, robotic musicianship, computational music for all, computational and cognitive musicology, and brain music.