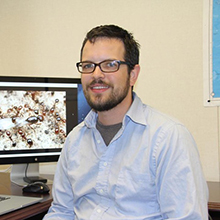 
Investigating the Molecular Basis of Behavioral Variation in Social Insects

Labor is divided among distinct reproductive and worker castes in social insect colonies (those of ants, bees, wasps, and termites). Typically, any given female has the potential to become a queen or a worker, with her developmental fate decided by nutritional input. This caste system provides a natural framework to study developmental and behavioral variation among genetically similar individuals, termed phenotypic plasticity. We are interested in understanding the molecular mechanisms and evolutionary processes underlying phenotypic plasticity in social insects.

In the fire ant, Solenopsis invicta, two social forms exist in close proximity: one form has colonies with a single reproductive queen (monogyne) and one form has colonies with multiple reproductive queens (polygyne). Monogyne and polygyne fire ants are differentiated by a large inversion on chromosome 16, the "social chromosome." This inverted region contains hundreds of genes, but is referred to as a "supergene" because it is inherited as a single unit and does not exchange genetic material with the noninverted form of the chromosome. Supergenes have been implicated in the origin and maintenance of alternative phenotypes in a growing number of animal taxa. We are interested in understanding how chromosomal rearrangements, such as inversions, affect gene regulatory networks, and how the structure of chromatin differs between distinct forms of a supergene.